The Footstool, with the approach route on the rocky spur running diagonally left and up directly beneath the summit. Tewaewae Glacier and Stocking Stream are right of the spur

Mount Sefton (3,151m, far left) and the Footstool (2,764m), with the Mueller Glacier Lake beneath. Sefton Bivvy (1,650m) is the miniscule black dot directly below the summit of the Footstool, just where the snow begins

The Footstool is left, viewed from the boardwalk en route to the Hooker Glacier. Mount Cook is in the distance. To access Sefton Bivvy you cross this tussock flat on the left, to the bottom of Stocking Stream

Near the bottom of Stocking Stream, with the Tewaewae Glacier and the Footstool ahead. To the left is the very steep rocky spur that gives access to Sefton Bivvy

A waterfall on the Stocking Stream

Near the base of the trail (about 900m) that exits Stocking stream for the rocky spur, looking back to the Mueller Glacier Lake

The view back to Mount Cook Village from about 1,300m on the rocky spur

The view back to Mueller Glacier Lake and Mount Cook Village, from about 1,300m on the rocky spur

The view back to Mount Cook Village, from about 1,550m, below Sefton Bivvy

Sefton Bivvy (1,650m), with the Tewaewae icefall and part of the east ridge of the Footstool (above left)

An alternative to Sefton Bivvy - Mount Cook's version of Pride Rock, just along the ridge from the Bivvy. Directly above (left) is Mount Sefton. Skiers are climbing beneath the Footstool, far right

An alternative to Sefton Bivvy - Mount Cook's version of Pride Rock, just along the ridge from the Bivvy. Snow melt from the blob on top provided a very civilised, continuous supply of running water

Skiers ascending beneath the Footstool. Mount Sefton at left

Skiers ascending beneath the Footstool

Looking up the Mueller Glacier from Sefton Bivvy. Mueller Hut is in the flat snow field on the left

Ascending the Tewaewae Glacier, above the bivvy, towards the east ridge of the Footstool. Here at about 1,700m

Sefton Bivvy, a tent and the bivvy rock at right, with the Mueller Glacier Lake left

Checking out the route to the east ridge of the Footstool. Next morning before dawn, we crossed the ridge, just left of the small dark rock on the skyline, left of centre

Heading back to the bivvy rock, feeling confident about the route and the nice firm snow

Dusk cloud action over the Footstool (centre) and Mount Sefton (left), viewed from the bivvy rock

Sorting gear at the bivvy rock

We got underway at 3.45am in a beautiful still morning. Lots of avalanche debris about, but there had been a good freeze. Dawn saw us over the east ridge and down into the Eugenie Glacier at about 2,150m

We crossed the east ridge in the dip at bottom left. The head of Lake Pukaki is in the distance

Looking up the Eugenie Glacier to the main divide, with the east ridge of the Footstool left; and the summit being the highest point on the skyline. Our route took us up the south end of the head wall onto the main divide, in the dip right of centre marked by the isolated section of exposed rock, left of the obvious cliffs

Even in beautiful dawn light the many crevasses kept us wary

At about 2,200m, approaching the headwall of Eugenie Glacier, which leads up a steep frozen snow slope on to the main divide

Above the headwall on the main divide at 2,300m. Our route to the summit was up the unremarkable snow slope. There are very few features on it to indicate scale. It's bigger and steeper than it looks

Piotr on his way to the summit - eventually. It looked so close, but this section is about 450m vertical

Pausing at 2,500m to enjoy a world class view. The main divide stretches north to Aoraki Mount Cook and beyond

This shot, taken by Piotr Nowak, gives a better feel for the steepness of the slope for much of the time above the col on the main divide

At about 2,700m, approaching the summit

View south, directly down the south east face of the Footstool. Beneath the Tewaewae Glacier, the bivvy rock is a tiny black spec near the snowline at bottom left. Mueller Glacier snakes up toward the top right

All set to abseil off the summit from this snow bollard. To reach the summit required a short pitch up through a near vertical rock and rotten snow chute (photo Piotr Nowak)

Making the most of the 60m rope, now below the tricky rock chute (photo Piotr Nowak)

The west coast cloud continued to slowly gather as we descended

On our descent we preferred not to down climb the steep headwall; and also to avoid the now softening snow over the crevasses of the Eugenie Glacier. Here Piotr heads down towards the northern side of the east ridge

Though not technically difficult, the northern side of the east ridge is sufficiently steep and exposed to crevasses below to require several hundred metres of mainly front point down climbing (photo Piotr Nowak)

Back on the Tewaewae Glacier, looking at the south east face and summit of the Footstool 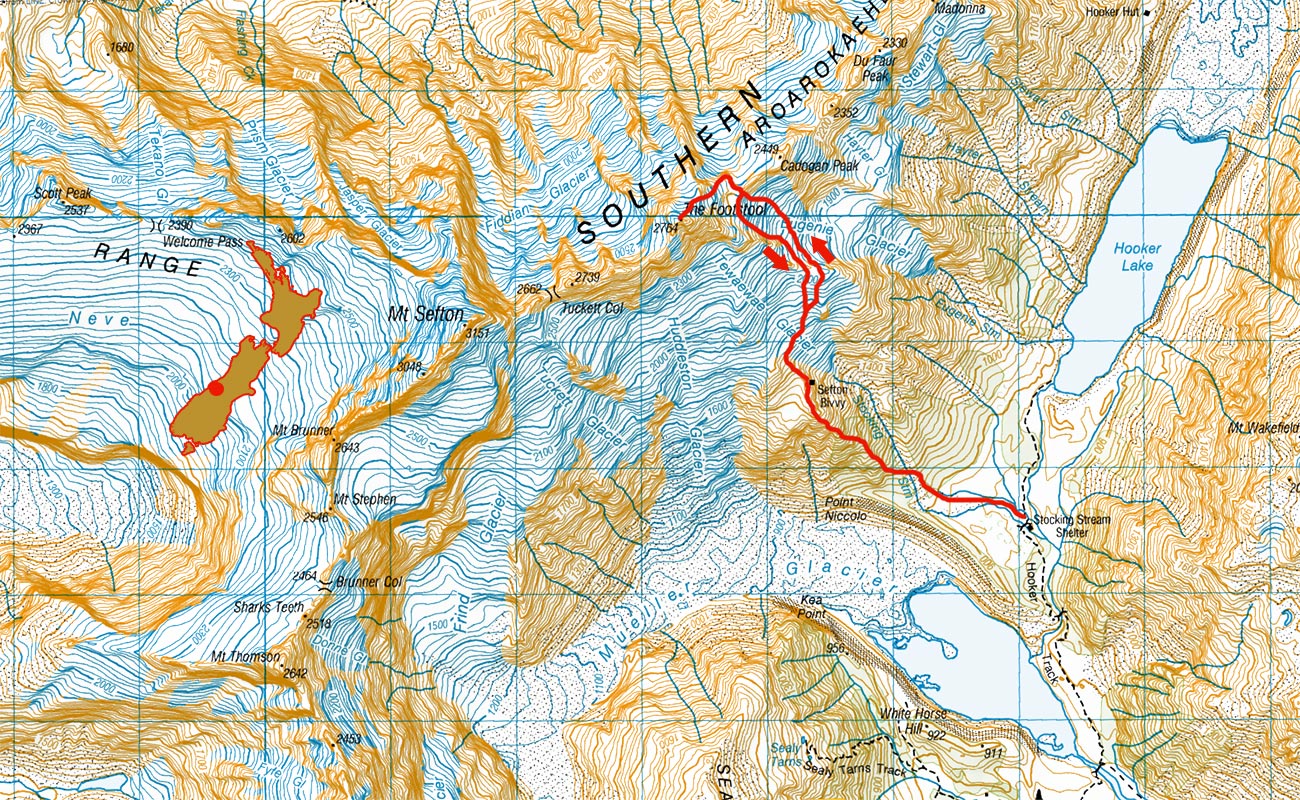